OPINION: PGA of Slovenia President, Jure Čoh – How Pia Babnik’s Success Could Be a Milestone in Slovenian Golf

Golf Pride® Continues to Innovate with New CPX, the Softest Performance Grip Yet

EDUGOLF Partners Focus On Research, Standards and Education at Meeting in Madrid

The PGA of Canada’s Commitment to Safe Sport 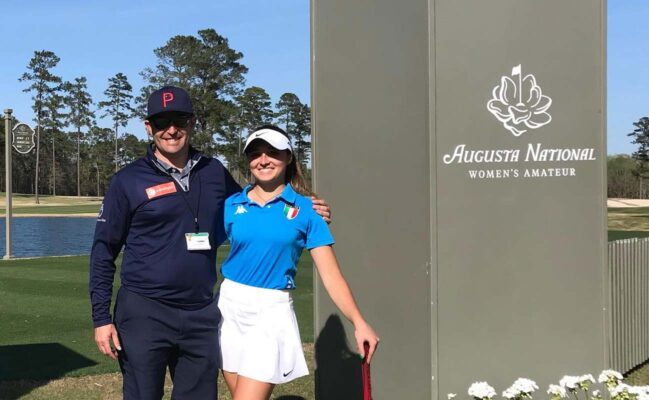 “Carolina and I have been working together for two and a half years now and we have been to some big championships where she has performed extremely well. She has been a part of the Italian Federation squad and has worked with Enrico Trentin (PGA of Italy) as part of that too.

“Now she has just started college at the University of Arizona and so has been more in the hands of her college coach down there for six months now, but Enrico and I work with her more when she comes back.

“Being able to work with Carolina at an event like the ANWA made me very proud because I know it is a privilege to be at somewhere like Augusta National wearing a coaching badge. Of course the best would be to be a player, but the next after that is definitely as a coach…! 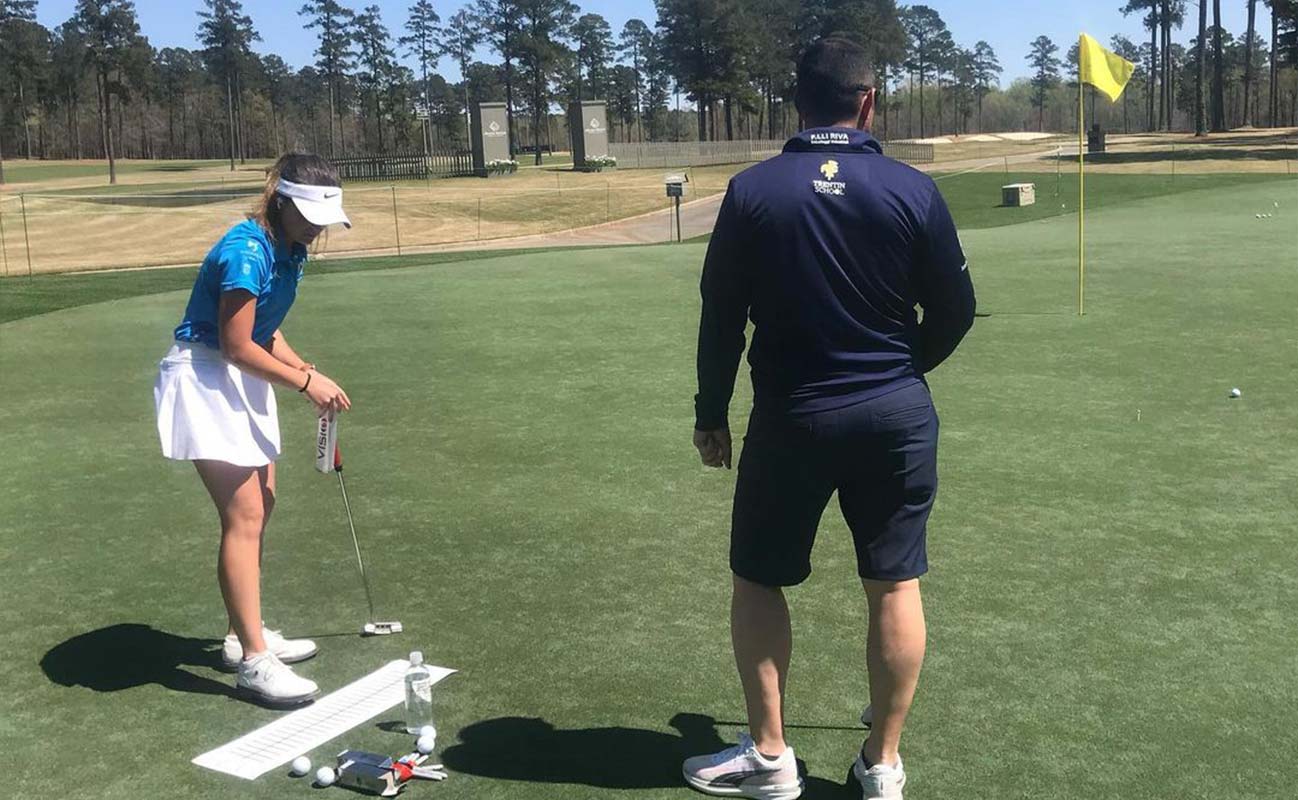 “We prepared for the event by working a lot on distance control – at Champions Retreat and Augusta National it is very difficult to always play for the pin due to the size and shaping of the greens, so I told her to work a lot on distance control and direction because when you cannot go for the flag you need to find the smallest spots on the greens and need to be sure of making that distance.

“I am a type of player that may not be so spectacular but am very consistent having grown up with coaches that were very strict on course strategy and sometimes very conservative – but this means you become a very consistent player and this is what I try to get my players to be. So consistent distance control and direction were our aims and for me you can only use TrackMan to achieve this.

“We do play together a lot when she is in Italy as the challenge between each other is good practice (for me as well!), but a lot of time is spent working on TrackMan – this means I am not guessing at anything, I know exactly what things are – it has been game-changing.

“We have previously worked together a lot on distance as she is not very tall and if you are going to go to college in the United States then you need to be longer and longer. The facilities are great in the US but she is alone and has to deal with things differently and has done very well. It is one of my goals for younger players to be more open-minded and to think on their own so they trust me but do not need to depend on me.

“But we told her if she can get 15-20 meters more then that would help and I have been positively shocked as she is much longer than she was and was even longer than the two girls she played with at the ANWA who were taller than her.

“Just before the event when she was preparing I wanted to remind her that she is at the the ANWA because she is one of the best in the world, because she earned it – she was not invited really, she is in the top 50 and deserves it. We were also there to learn – it was her first time and we wanted her to just enjoy it.

“She played very well on the first day with 15 greens in regulation, but she shot three-over because of some mistakes on the green and after the second day she just missed the cut. In the US then they play with very different conditions to what she is used to in Italy and even as a very experienced player she needs to get more experience over there. And also more experience with people watching – we were surprised by how many people were there even at seven o’clock in the morning! Putting is really where her focus should be in the US – the conditions are so difficult because the greens were so fast – probably 15 on the stimp meter. 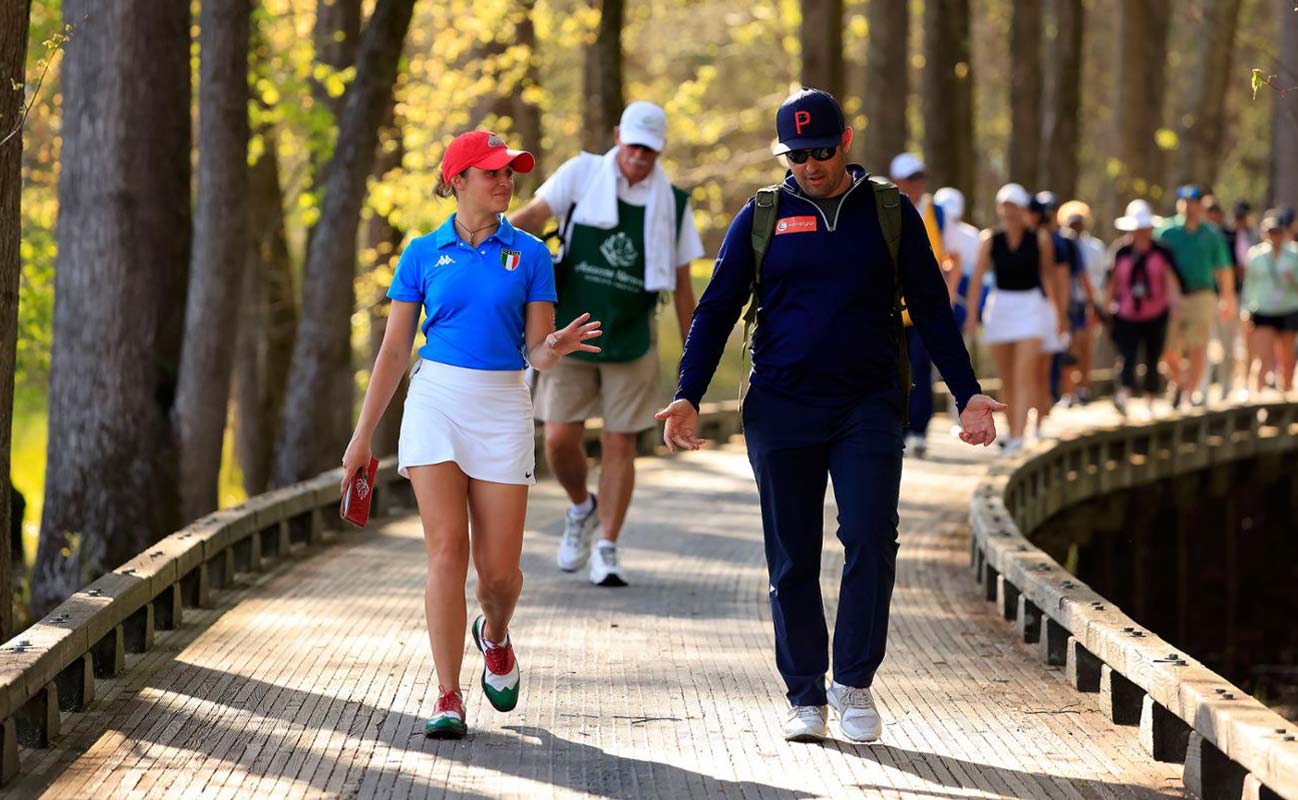 “Overall the experience was incredible for the both of us – walking in to Augusta National was amazing and the colours were astonishing – can you ever see anything greener?! Is the grass even real?! The clubhouse was amazing, it is so big, and we even had the privilege of eating in the members’ dining room where the level of service is unbelievable and there are these incredible drawings of the original course. They do a great job of building up the myth of Augusta and everything around it and everyone was so welcoming.

“At Champions Retreat we were walking with Carolina and there was a man following in an Augusta cap and we got talking – then on Saturday we saw him in his green jacket at Augusta National and he came to cheer for Carolina! Some people think they may not be like normal golfers but they are just pure golf enthusiasts and they work hard to keep the traditions of the game going.” 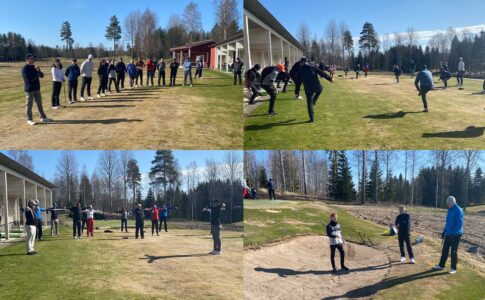 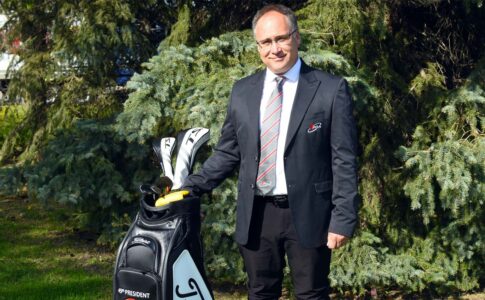