Sustainability – Why it Matters to Golf

ESET: On Course for a Good Hacking

Changing the Face of Women’s Golf

A Pledge for Greater Inclusivity

Ander Martínez Announced as New President of the PGA of Spain

The 2014 Ryder Cup Matches have been some of the best ever – especially for Team Europe who flexed their muscles all week long to win with 16.5 points to Team USA’s 11.5. Two years ago it was the ‘Miracle at Medinah’, this year it’s been glorious at Gleneagles.

“It’s easy to put a plan in place, but it’s hard to execute…but that’s what these players did,” said Captain Paul McGinley. “We relished the chance and did it with a smile.”

“We had pressure on us…we were favourites and it was important that we embraced being viewed that way.”

The final round began with Team Europe as comfortable as perhaps they could be at that point with a four-point lead over the visitors, meaning only four more points were required to retain and an extra half point for the win.

Rory McIlroy showed why he is world number 1 by bulldozing his way through Team USA’s Rickie Fowler carding seven birdies and an eagle for a substantial 5&4 win and getting the first point on the board early on.

Once all 12 groups were underway there was a distinct red glow to the leaderboards but it didn’t take long for the colours to equal out as the comebacks came. Graeme McDowell started the trend having been down for 11 holes but ground out solid play through holes 9 to 15 to end up with a well-fought 2&1 win.

G-Mac’s efforts can’t have gone unnoticed as the rest of the European contingent followed suit upping their games and slowly chipping away at the USA’s early leads.

Kaymer’s match against American giant, Bubba Watson, was with the German for most of the round and an incredible bump-and-run approach third shot on the 16th fell away into the side of the cup to take a 4&2 victory:

“I wanted to take the win before we got to the par-5s because I knew he would be going into them with irons…but to chip in to win was just unbelievable.”

Meanwhile with the Europeans close to victory at 13 points it was Englishman, Justin Rose, who stepped up to make a birdie and win the last hole bringing his match against Hunter Mahan back to all square gaining a half point.

It fell to Jamie Donaldson to push Team Europe across the line and whilst he missed an opportunity to put the nail in the coffin against the USA’s Keegan Bradley at 14, a half at 15 finished the match off 4&3 taking the total to 14.5 points, enough to secure the trophy once again.

Sergio Garcia and Ian Poulter took their games to 18 but each took a point for Team Europe, whilst Westwood and Bjorn each lost their matches to Jimmy Walker and Matt Kuchar respectively. Victor Dubuisson was last to finish with a half point, remaining unbeaten for the week. 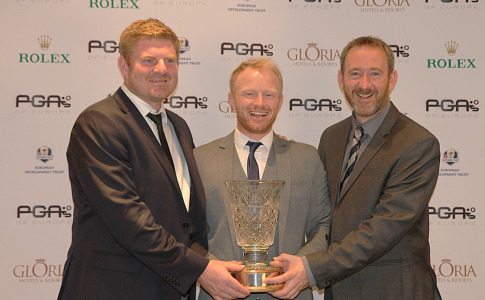